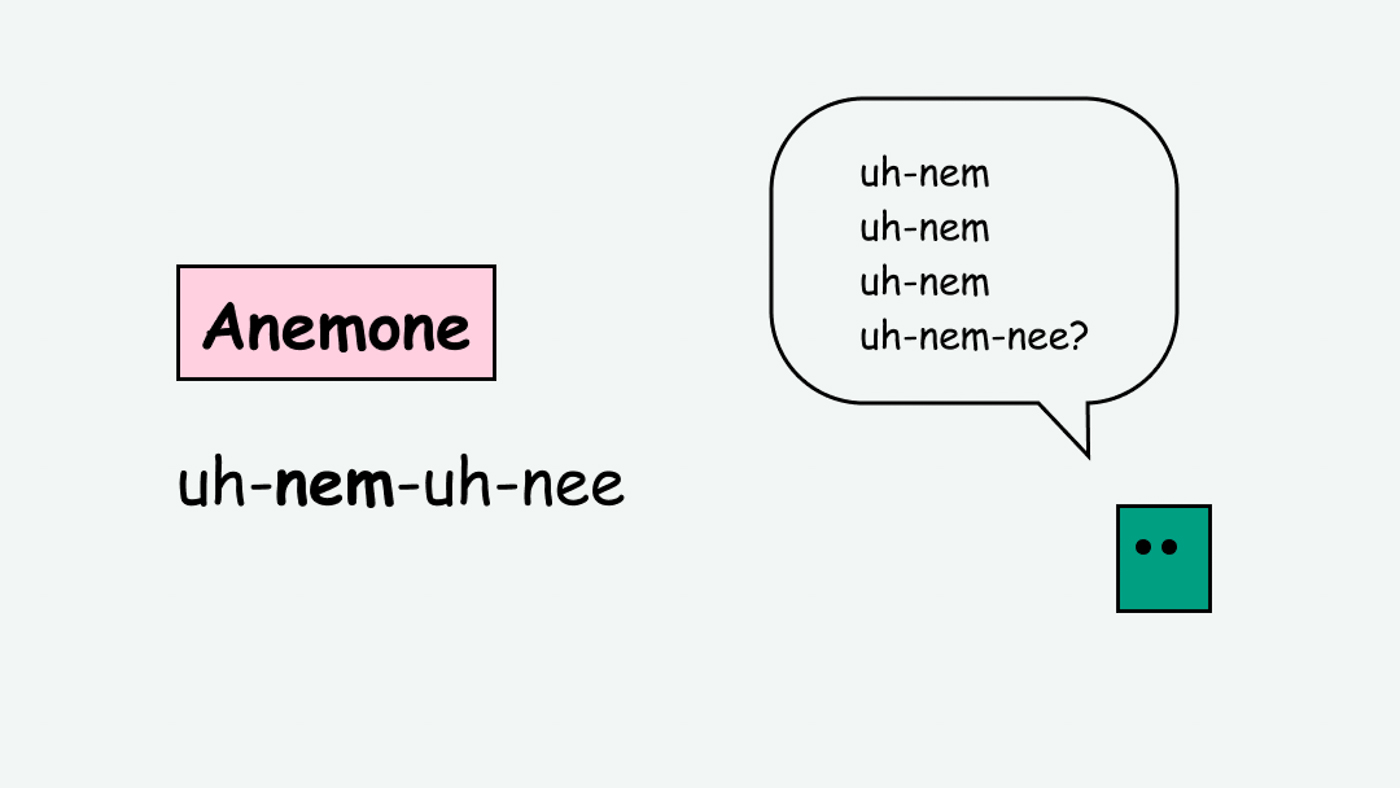 Image description: The word "Anemone" is highlighted, with the phonetic spelling below that says, "uh-nem-uh-nee." On the right is a small green square character saying, "uh-nem uh-nem uh-nem uh-nem-nee?" (Which is a reference to the Finding Nemo movie).

🚩 This page is in progress -

If you would like to contribute or make a case to prioritize this page, please fill out the form below.
Why This is ImportantHow to Implement ThisHow to Test ThisCreditsContribute and Give Feedback

Why This is Important

Explaining how to pronounce an ambiguous word is accessible to screen reader users and people with reading or learning disabilities.

Blind and visually impaired people use screen readers to interact with websites and apps. A screen reader is a type of assistive tech that converts things on screen to audio and/or braille. It's important that things are understandable and interactive to screen readers.

Keyboard accessibility is essential for people who do not use a computer mouse (which might be because they have unpredictable or very specific movement due to a motor disability). Many Blind and visually impaired people also use keyboard interactions in order to use their screen reader.

Error support is accessible to people with a diversity of disabilities. A cognitive disability might affect how a person perceives and understands things. A physical disability might lead to unpredictable movement. Other factors such as environment, stress, and multi-tasking may also lead to errors.

In order to be accessible, gestures and interactions must account for people with physical and motor disabilities, who might have unpredictable or very specific movement.

Level AAA compliance is considered more difficult to meet because it requires more resources to fulfill. It also might encompass conflicting access needs (meaning what is accessible to some might be inaccessible to others). Use your best judgment of your target audience and your team's capabilities to determine if this is a pragmatic goal to reach.

How to Implement This

Provide the phonetic pronunciation directly after the word

It would help your case if there’s no evidence against you that could be considered inculpatory (in-ˈkəl-pə-ˌtȯr-ē).

Many digital dictionaries and glossaries also include an audio file with the phonetic pronunciation. This helps ensure that hearing people can understand how a native speaker would pronounce the term.

Provide pronunciation in a glossary

A glossary can help centralize abbreviation expansions, definitions, and pronunciation all in one place. As an extra accessibility boost, you can link the term directly to where it’s defined in the glossary.

Use the ruby pronunciation element

Some accessibility docs recommend using the ruby text element to programmatically set the pronunciation. This is often used to help people pronounce Kanji in Japanese. However, according to some user feedback, this is actually not recommended because screen reader users are used to the quirks of their technology. Overriding the pronunciation might run the risk of confusing people.

There does not seem to be common agreement on this. If you have additional thoughts about this, please fill out the form below!

How to Test This

No credits yet. But this could be you!
No items found.

Contribute and Give Feedback

If you would like to provide feedback or contribute content on this resource, please fill out the form below.

✅ Thank you, your submission has been received!
⛔️ Oops! Something went wrong while submitting the form. Please check your internet connection and try again.

If you continue to encounter issues, please reach out to alexyingchen(at)gmail.com.